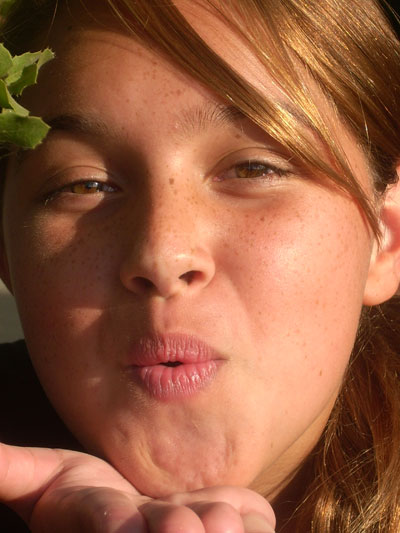 After being raped twice at age 18, I found myself afraid to say, “No” to a boyfriend when he seemed to want to have sex outside of marriage. Because of this fear, I had sex with two boyfriends I otherwise wouldn’t have. The second of the two got me pregnant when I was 19 even though by then I had been using the Birth Control faithfully. I took the pill each night at the same time. For anyone who knows about the birth control pills there are two separate colors. At some point when taking the 2nd color at the end of the pack you are supposed to have your period. One night I went to take the pill, realizing I needed to open a new pack. It was in the mist of doing this that it suddenly dawned on my, “Oh crap! I was supposed to have had my period by now!”

The next morning I went to the Nurse’s Office and took a pregnancy test. But you see there was some problem with the test. It was wrong! I don’t know. Maybe it was defected. Anyway, I convinced the nurse so she gave me another pregnancy test. It was also wrong. The entire batch of them must have been defective! The problem is that they kept showing that I was pregnant. Stupid test. What did it know?

I told my boyfriend and asked him to take me to Planned Parenthood where I could get a “real” pregnancy test. He did. When the Nurse informed it that it too was positive, even though I knew at that moment I needed to go to a hospital for a really “real” test, I decided to humor her a little and asked her what I was supposed to do. She said that I have 3 options: I could keep the baby, give the baby up for adoption or have an abortion. She gave me paperwork on adoption attorneys and the address and telephone number for where I could go for an abortion. Outside Planned Parenthood was decorative stone where I sat as I tried to convince Miguel that all the tests were wrong and I needed him to give me a ride to a hospital for a “real” test. After an argument, which I lost, he finally convinced me that I was actually pregnant.

I had pressure from Miguel to have an abortion. You see as it turns out he already had another child out of wedlock. It was emotional pressure. At times he threatened suicide if I didn’t have an abortion. When I brought up the possibility of adoption, I’d even found a wonderful couple willing to adopt, he got angry. How could I possibly consider giving up a child for adoption? Once you give up your child, you have no idea what happens to that child. Just look at you, he said. Your mother gave you up for adoption to a couple who divorced after two years. They’d only wanted to a child because they thought a child will fix their marriage. They both remarried. You had a tough time with your step-dad who also adopted you. Your first adoptive dad died from Lung Cancer. We are NOT going to do that to our child. Abortion is much better! At least we will know what happened to our child.

I had pressure from my councilor. I felt a tremendous amount of anger and hatred from her because I didn’t immediately agree to an abortion. HOW DARE you consider bringing a child into this world? You will ruin your life and the life of the child! You a high school graduate whose education will have been wasted on you! Tax payers’ money paid for your public education – you’ll be wasting their hard earned money! And for what? So you can be selfish and have a baby!

I left Sacramento and moved to Ventura to stay with my grandparents while I looked for a job. Soon after I arrived, I began to feel the fluttering of my baby move. Then I began bleeding heavily and it didn’t stop. On my way to a job interview, I casually asked my grandma if we could just swing by the hospital on the way home. After examination and tests, the doctor told us that there was nothing he could do and to go home to rest as I would be miscarrying. With blood flowing down my leg at the grocery store I bought additional pads to the one the hospital had given me which had already overflowed in the 10 minutes since we’d left the hospital.

A day or so later, when the blood stopped and it was clear that I’d not lost the baby – it took 4 people at the medical clinic to find my child’s heartbeat, but it was found – my grandma began to get nervous. You see I was the first person in our family to ever have a child out of wedlock, so not only had a brought shame to our family, my grandma was nervous that I would still be living with them when I had the baby, that I would leave the baby with her, that she would forget to feed the baby and that the baby would die. She was terribly stressed out as you can imagine. Her friends told her about a Maternity Home in Santa Barbara and she took me there for an interview.

At the Maternity Home, I would be paying $300. rent would be able to stay there until my child turned 2 months old. I decided to turn down a second interview in Ventura at an Optometrist’s Office in favor of moving into the Maternity Home. We had guest speakers every week and various Child Birthing type classes held at the Maternity Home. I learned so much. I was regularly speaking with my dad (2nd adoptive) and Miguel. My dad was pushing adoption and Miguel was still pushing abortion. One of the guest speakers was a CA Adoption Attorney. I discovered that I would have to have Miguel agree to and sign off on an adoption. This was out of the question. I knew at after that talk my only choices were to either have an abortion or keep the baby. Then another speaker came, a single mother of a toddler son. I couldn’t wait to hear first hand about what it would be like to keep a baby. She said that she lived together with 2 other single mothers and their children in a 1-bedroom apartment and that even sharing the rent it was difficult for her financially. Her parents helped her out. I knew my parents had not and were not going to help me financially and I did not know anyone I could share a 1-bedroom apartment with. I began to realize that with my temporary jobs I was working I would not be able to make the rent even on a Studio Apartment.

I was about 6 ½ months pregnant now. The Ultra Sound showed that I was having a girl. The picture showed her arm over her face and I could see the curve of her nose. I took a long walk at night and considered very seriously as to whether or not I would have to abort. May things went through my mind. I was supposed to miscarry, but didn’t. My own birth mother gave me life. I knew one of the side affects of abortion is infertility so if I aborted, being adopted, I may never have the chance to meet another blood relative. Yellow Buckets. In the 5th grade I had been assigned to debate the issue of Abortion by my teacher. In my research, in a magazine I saw all the yellow buckets which each held the body of an aborted baby at various stages of development that had died from various forms of abortion. Not thinking very highly of myself, I didn’t care so much about “my” baby, but being “in love” with Miguel, could I really put “his” baby in a yellow bucket. I knew at that moment that I was going to have to build a wall within myself , a very strong wall, because when I aborted if I ever allowed myself to feel whether right away or 10 or 20 years down the road I would without a doubt kill myself for killing a baby.

Luckily it was soon after my decision that I discovered another Maternity Home in Sacramento called Bishop Gallegos. I ended up being able to move up there. The rent was $100. less a month and I could stay until my child turned 3 months – an extra month of being able to save before having to find a place to stay. I knew that the cost of living was much better and that my daughter and I would actually have a chance if I had her there – we were less likely to wind up in the streets.

On November 1, 1994 I gave birth to my daughter, Juliza Aguilar, after 22 ½ hours of labor. She was the 4th child born at Bishop Gallegos. She is now 14 years old. I’m still a single mom. I now work 6 days a week between 1 full-time and 2 part-time jobs to afford a 1 bedroom apartment. I am more than $20,000. in debt and earn close to $30,000. a year. It is purely by the grace of God that we are barely making it. The point is we are making it! I volunteer at the Sacramento Life Center on the Pregnancy Hotline. In January, Juliza and I went for the first time on the Walk for Life in San Francisco. We pray the Akathist of Repentance on behalf of women who have aborted their children outside a local Planned Parenthood Abortion Clinic during 40 Days for Life. I have spoken at 3 Pro-Life Events this year: the CA Pro-Life Breakfast on the 35th Anniversary of Roe v. Wade, the 2nd Annual Bishop Gallegos Benefit Dinner and at a Pro-Life Rally at Easter’s Catholic Book Store featuring a Eduardo Verastegui, star of the Pro-Life movie “Bella”.

While living at Bishop Gallegos through a Bible Study I learned about the Holy Eucharist in John 6 and converted to the Catholic Church. When Juliza was about 2 she would scream, “I WANT MY JESUS!” every time I received Holy Eucharist at Mass, children are forbidden to receive in the Roman Catholic Rite. Before she turned 3 we discovered the Eastern Catholic Church where Juliza finally able to receive “her Jesus”. When Juliza was about 8 years old, at last we entered the Greek Orthodox Church, our spiritual home. I wish we had discovered the Orthodox Church sooner and almost did because one of my roommates in the Maternity Home in Santa Barbara was Greek Orthodox, but I was very hormonal, not very nice and just thought she was some kind of weird Protestant who did some Catholic stuff backwards – like the sign of the cross.

God has His reasons for how things happened in my life. I am grateful that I kept my daughter. I can’t imagine life without her. I feel very lucky that we found our spiritual home with in the Greek Orthodox Church. My favorite Bible verse which I think sums up my experience is 1 Tim. 2:15 “Nevertheless she will be saved in childbearing if they continue in faith, love and holiness, with self-control.” I’m still working on the conditions, but I think the point is made. Because I had my daughter, I found myself on the path to find God’s True Church. Now there is hope for me and for my salvation.